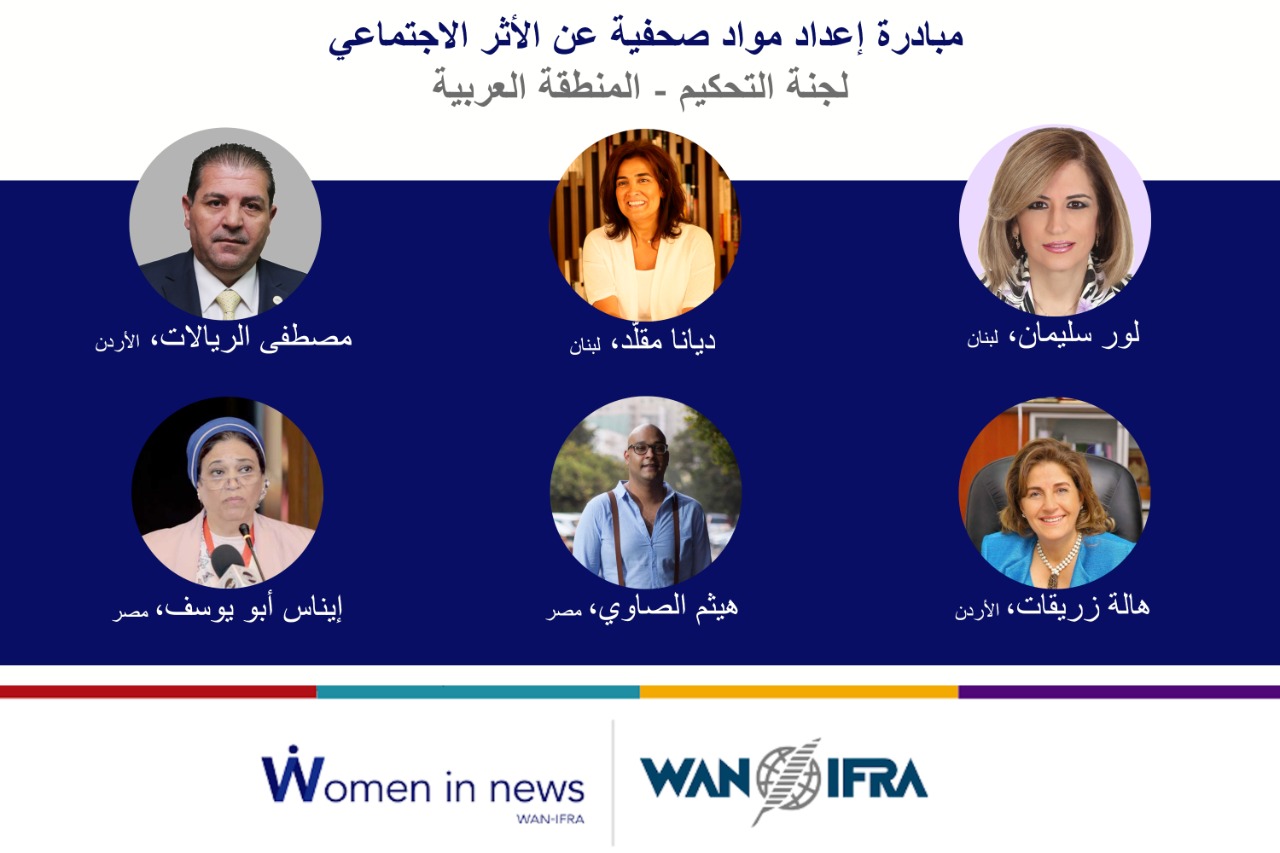 Today, WAN-IFRA Women in News (WIN) announces the jurors for the Social Impact Reporting Initiative in the Arab Region, a new initiative offered to current and past participants of the WIN Leadership Accelerator Programme. The jury (bios in Appendix below) will consist of:

The unprecedented global pandemic has reaffirmed the crucial work of journalists and media organisations to provide accurate and timely information to the audiences they serve. It has also exacerbated the financial pressures on the news media industry, and with that, increased the vulnerability of individual media practitioners.

“We are thrilled to have such an illustrious group of jurors for this important initiative. We heard from our community the increased financial pressure that they and their organisations have been under since COVID-19 and knew that providing funding was a direct way we could support them. Open to participants in our Leadership Accelerator programme, it ensures that women’s voices are not sidelined or lost in reporting, and provides some financial support to our media partners during a time under which they are facing increased financial pressure,” says Fatemah Farag, Director, Arab Region for Women in News.

The lockdowns from COVID-19 have disproportionately affected women, forcing many to take time off work to provide childcare or take care of family members. This has impacts on career progression, loss of income and representation in the workforce. This imbalance then drives further inequality between men and women which will have lasting effects even after the pandemic is over. By providing funding to WIN’s women journalists, the organisation is helping minimise more unintended consequences.

This initiative follows a similar one in Africa which provides direct support in the form of small cash grants (for media organisations and industry associations) and sponsorship for reporting assignments (for individual journalists) that focus on social impact.

Laure Sleiman: She was the chief editor of the National News Agency in Lebanon until October 2019, where she had implemented regional, international and multimedia  news sections, in addition to introducing French, English and Spanish versions of the agency’s website. She is a veteran journalist with more than 30 years of experience as an editor and reporter, and received several awards throughout her career.

Diana Mokalled: Diana Mokalled is a Lebanese journalist and documentary filmmaker with 28 years of experience covering conflict and dealing with Middle East issues. She has over 50 hours of documentary work dealing with social and political issues in the Middle East, women's issues, minorities, and human stories. She began her career as a reporter for Future TV. In 2017, she co-founded Daraj website, which is an independent platform that raises problematic and rarely discussed issues in the Arab region.

Mustafa Riyalat: Mustafa Riyalat is the editor in chief of the Jordanian newspaper Al-Dustour and has been working in the field of journalism and media for 25 years. He is also a political analyst and lecturer, in addition to being a media consultant in the Arab region at the King Abdullah bin Abdulaziz International Center for Dialogue. He is an expert in managing programs and projects directed to monitoring and following up the performance of Parliament, elections and the media.

Hala Zureiqat: Hala Zureikat works as a media consultant for the Jordanian TV Ro’ya that she co-founded in 2011. For 28 years, she worked in the field of radio and television and became director of Jordanian television in 2007, where she established partnerships with international broadcasting federations in the fields of archiving, training, and co-production.

Haytham Sawy: Haytham Sawy is the director of 10MOJO channel, and is the founder of Ona Academy and Cairo Media School for media training. Haitham Sawy worked as a television reporter on a number of Egyptian channels, then moved to work in production and hosted several television programs, including "Black and White", a German-Egyptian talk show dealing with social, humanitarian and political issues.